**Please note, this is a direct follow on from Thwaites Brewery Tower, Part two: A concept*

I had many ideas brimming away creatively, and knew that I wanted to continue using projection, and had researched the work of Jenny Holzer in-depth during my second year.  I had also been to the Tate modern gallery at the end of last year and had witnessed her instillation work first hand.  I love Holzer’s use of truisms fused with mixed medias, but especially enjoyed her earlier grand scale projection pieces and her use of light to create her art.  I had looked closely at her use of text, but this time I was particularly inspired by her building projection on to large architecture.

Holzer’s work for me conjures up a nostalgic feeling, as if she is giving you a glimpse into past events, feelings, or even traumas that have driven her to shout it out to the world through this early form of projection mapping.  Of course, my own projection project in my own little part of the world was a miniscule state of affairs.  But I wanted the viewer to feel the ghost of Thwaites tower emerging from the debris of the fallen bricks below it.

After obtaining the original Thwaites tower bricks, I began to plan and make a maquette, a small scale model of my planned installation in order to explain my plans to tutors and peers during critique. (A more in-depth account of the critique can be found on the blog post ‘Using critique for professional development as an artist).  I’d never made a maquette before and it did look a little amateur, however, it was merely a visual representation of how my finished piece would look in a studio setting.  I used clear acetate with an outline of the tower to represent the projected image submerging from the bricks. 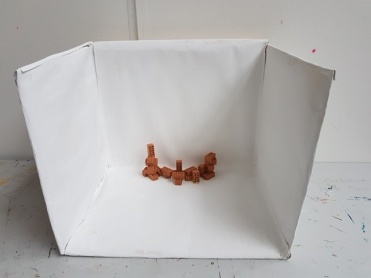 Due to the outbreak of Covid19 we are no longer permitted to go to the studio and the exhibition is now going to be an online event until a physical exhibition can be realised.  As I had the bricks and projector at home I decided to continue with the installation in my garden and in a true British style I ‘carried on regardless’.  Of course I feel my piece would have worked well within a white space, but as an artist one must be open to sudden changes and obstacles and basically work with what we have got.  I installed the bricks against my garden wall (more of a northern terraced back yard) and set up my projector, photographing the images.  These first images are very raw and only a reflection of the finished piece I intend to submit, but I was pleasantly surprised by the outcome.  I experimented with a few images of both colour and monochrome, but I did find that I preferred the vibrancy of the colour palette against the rough old bricks and the rustic wall behind.  In my final piece I intend to concentrate on the angle of the projection and the height at which I take the photograph to avoid the elongation or distortion of the image, I also intend to add some light for more depth. 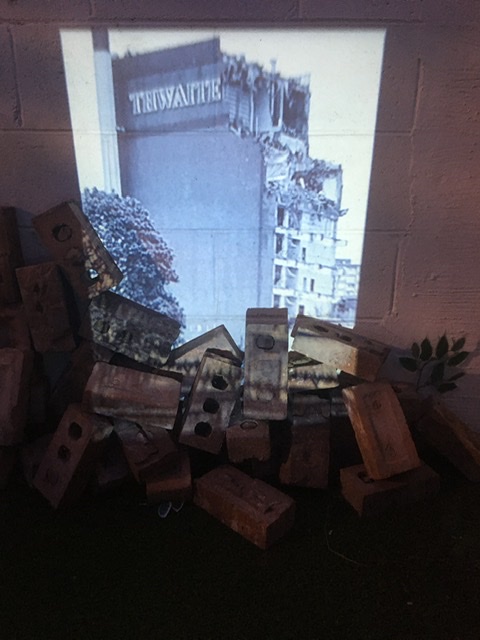 The gallery space we were originally going to use for exhibition is also the third year studio space in the ornate Victoria building on the Blackburn campus.  The ceilings are high with large beams and lots of natural light, creating the perfect tempo to curate a successful showcase.  It was suggested by tutor and artist Jamie Holman that no one really considered the roof space when thinking about their work and it had me thinking about a second installation project.  I had the idea of hanging some bricks from the ceiling by thick rope and I discussed this with my fellow art students.  I find these times of calm and reflection such valuable commodities where we gather in small groups and bounce ideas from one another.

Fellow student Susan Brazendale pointed me in the direction of an artist she had seen whilst visiting South Africa.  The artist Kendell Geers at the Zeitz Museum of Contemporary art.  Geer’s work ‘Hanging piece’ 1993 used bricks, rope and metal hooks to create an installation of a multitude of bricks hanging from the ceiling.  Geer’s work edges on the political with his installation being a nod to apartheid, and how town shippers hung bricks from highway overpasses to cause damage to the cars passing below. 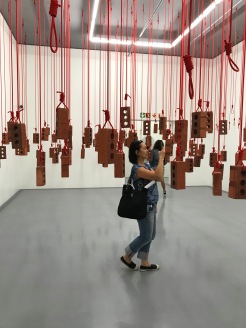 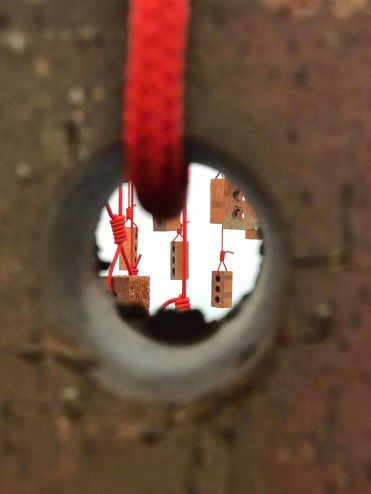 I seem to be drawn to political art and found a lot of insight and inspiration in the works of Ai Weiwei.  Weiwei is best known as a political dissident, famously undergoing incarceration and constant surveillance by the Chinese authorities.  His work centres around his experiences and his personal struggle for freedom of expression.  His studio in Shanghai was demolished in 2011 at the insistence of the state.  Weiwei constructed an edifice of rubble from the debris of his studio as a poignant installation, a reminder of how the authorities sought to silence his voice. 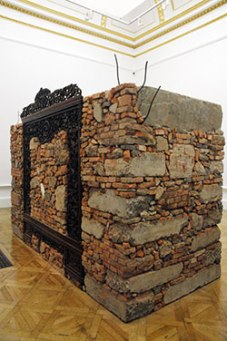 My installation was dealing with memory and loss, and I wanted each brick to represent a memory or a word spoken, suddenly becoming past tense and a memory within itself as soon as it leaves the mouth.  This would be interpreted through 16 hanging bricks to represent my own memory of my father who worked at Thwaites for 16 years.  The red rope representing the vibrant lettering that adorned the tower, lit up like a beacon over the town, and I wanted to add some form of spoken narrative as the viewer meandered their way through history.  I discussed the health and safety aspect of bricks hanging from the ceiling with tutor Steven Baldwin and technician Bill Kelly and we agreed between us that wood beams balanced between the steel girders of the upper studio space would be the safest way forwards. The ropes would attach to the wood beams and the bricks would hang as I wanted, with enough space to allow the viewer to walk through and take in the art as intended.

Obviously due to the pandemic this installation would not be happening, at least any time soon, and I could hardly start hanging bricks from my dining room ceiling.  I thought back to the maquette from the first installation and considered a small scale model to be used to make a representation video and include the audio I wanted.  This was the best solution under the circumstances as I had already put a lot of thought and research hours into this project.  It was also something that I felt brought me closer to my fathers memory as well as being a collection of art for the people of Blackburn, who all had their own memories and thoughts.  I  reached out through facebook to  friends and family and asked for their help in the form of voice messages, explaining that these would be used as part of a recorded narrative.  Doing this gave the piece more of a political angle, it raised conversations about the local council, and Thwaites decision to demolish the brewery, raising feelings of displeasure and in some cases anger.  It showed me how this art installation had the potential to become a public piece of art and was malleable as a piece of work, something I could definitely move forward with in the future. 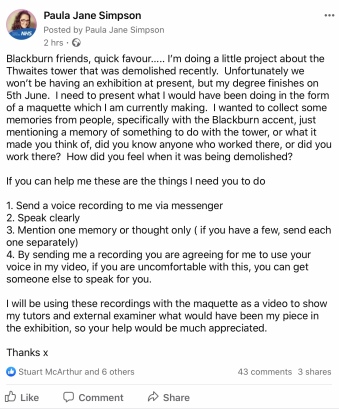 I knew I needed to put more effort into this model as essentially it was going to be my prop to showcase what I envisioned my final piece to be.  I had limited materials due to lock down so I improvised where necessary and produced a small making video of the construction of the maquette.  The finished piece will be added to my final proposal with full audio and I have to admit, I’m glad I didn’t give up on this piece as it’s an imperative part of my narrative. 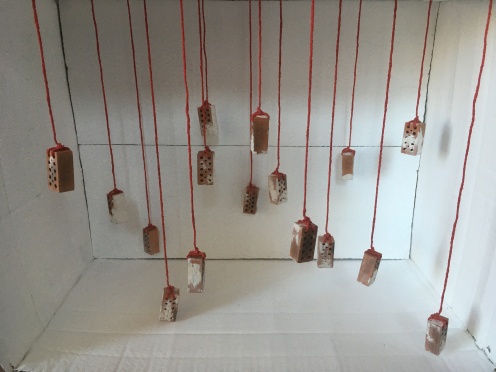 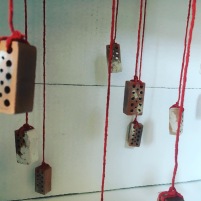 angled shots from inside the maquette.

A 43 year old mature student currently studying fine art at degree level. Registered nurse for 18 years and continue to work for the NHS whilst studying. Mother to a teenager which is a job in itself!! View more posts